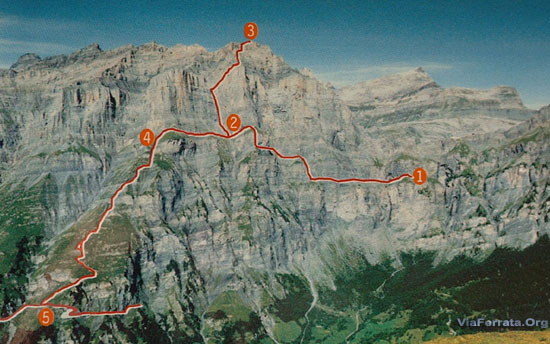 The longest via ferrata in Switzerland (time)

There are two ferratas to choose from:
- Mieläs-Loèche les Bains, the easiest, with 5 ladders
-Daubenhorn, with an incalculable number of ladders and 6 hours worth of via ferrata.

The probability of receiving a pebble on your head is as high as the expensive cost of the obligatory parking lots in Loèche.

The traditional metal steps in the rock were replaced by some stakes, some nails. If you fall it hurts and you can be skewered. You have been warned.

Stiff hiking boots are necessary to walk on the stakes and for the way down (on the snowfield).

If rain is in the forecast, abandon any plans for climbing because of falling rocks (which in dry weather are already frequent). Personally, I would never bring a child here!

Take at least 1,5 liters of water, for the via is very long.

Park your car at the bottom of the lifts. It is the least expensive parking lot of the resort.

The last lift to go down is at 18h. If you do not want to endure one hour of downhill, leave early in the morning.

July to end of September.

Mieläs-Loèche les Bains; about 5h
Daubenhorn; about 8h, 6 hours of via ferrata, 2h of downhill

From Geneva take the highway towards Lausanne-Sion. From Chamoix and Aosta go towards Martigny and then towards Sion.

After Sion, continue towards Sierre- La Souste and then zoom zoom towards Brig.

In Susten, go left towards Loèche les Bains, or Leukerbad (over there they speak German)

Drop your car off in front of the Gemmi lifts, it's cheapest and most practical solution. All the parking lots of the resort are paying and are watched with the eyes of a hawk. The debts accumulated by the old big shots of the region have not all been paid off yet!

Go to Sierre with the train and then take the bus from the train station. Contact the SBB schedules and fares.

From the lift station (2,346 m) to the old Gemmi trail and the old route for the pass, after a few turns (partially with handrails), and then going down to the Untere Schmitte where a sign points out the via ferrata (about 2060m), 20 min.

Little via ferrata : A well marked trail goes through a first incline, and then starting at a wild cirque flattens out until you reach the first cables of the via.

You start this jam-packed day with a long traverse between rock and trails. It looks a lot like climbing. You are constantly in contact with the rock. There are few stakes and no steps. You have the option of either clutching the cable or playing with the rock.

Here, a surprise, you will discover the first aldder. You won't need to take a picture, it's not the last one you'll see... this via is a series of ladders!!!

Before getting to the junction of the Daubenhorn via or the junction that allows you to go back down to the Gemmi, 76 m of ladders await you.

Beginning of the 2nd part - The Chimney

You have chosen, then, the most athletic option of the day. This part is fairly dangerous. The void is ever present. A very beautiful section in the cavern is the source of a rather refreshing and relaxing moment, which is much appreciated before attacking a section that is a bit more strenuous and slightly overhanging.

At the summit, take a little break to sign the golden book and then keep going on to the final part.

Be warned! If you eat your munchies here, make sure that you are on the true summit. Some are tricked and believe they are finished when actually...

The last ladder is fairly strenuous, especially because of the fatigue accumulated during the day.

The last part was made longer with the addition of an extra section through a sort of tunnel. This is, however, a physical variant, and you can avoid it.

Account for 1h30 to 2h.
Go onto the snowfield and exit on the left at the bottom. The trail is marked with red and white markings.

Contact the Tourism Office. It's not easy to find a place to catch some zzzzs. There are plenty, but the resort is not very affordable.