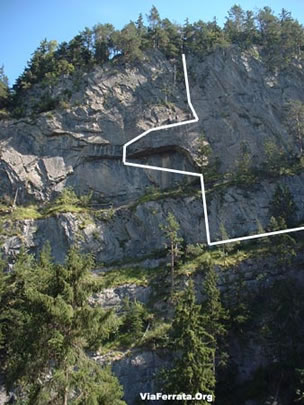 Begins with some beautiful footbridges which are quite chilly due to the proximity of the waterfall. Traversing for the most part. One section can slow down beginners, it is a bit athletic and relies on the arms for 3-4 meters.

Leave a shuttle car at the beginning of the ferrata. The trail to get back to the village is a bit long... If you have a mountain bike, it will do, especially as the region is perfectly suited for mountain biking.

If you decide to do everything on foot, go by way of the Galeries Défago (a trail carved into a cliffside). It is next to the via and it is a beautiful hike on a vertiginous cliff, but accessible for everyone.

It is a bit hot during the summer in the afternoon. Better to do it in the morning when it is still in the shade.

Geneva-Lausanne, take the highway towards Martigny-Sion-St-Bernard. Exit at St-Triphon/Monthey.
Take the tunnel that goes up the valley towards Champéry-Morgins.
At Troistorrents take the road towards Champéry.

Take the train to Aigle. Then the AOMC towards Champéry. The train terminal is found a stone's throw away from the trail that leads to the via ferrata. Contacte the SBB for bus and train schedules and fares.

Option 1
Go towards the tennis courts that are found near the train and cable car station. At the tennis courts and in front of the Paladium (huge sports center), go down the Chemin duTavis trail and the bridge of the Sous-Sex which goes towards the river. Leave your car near the little wooden bridge. Cross the bridge by foot and you will see a sign on the left which indicates the trail that climbs through the woods and leads to the via ferrata.

Option 2
By car, go towards the Grand-Paradis. Just before arriving to the Grand paradis, 200m after the stone bridge that you pass by car, go left just before the little bridge that straddles the river.

Do not cross the river, but go along it. Take the road that goes left and follow it. Once you arrive at a junction that is found near a tiny bridge straddling a small river, you are there. The trail that leads to the start of the via is found 8 meters after the bridge, in the direction towards Grand Paradis. It goes down rather steeply on the right.

The via starts with a footbridge and a kind of small hike to work up your appetite. A second footbridge, this time via ferrata style.... and a small uphill to whet your adventurous spirit and arrive at the very beautiful and impressive large footbridge 10 meters above the waterfall.

You'll get a little rest along a ledge before seeing the Bear... if you pay attention... he is hidden in a small cave! Whoever doesn't see him pays the next round!

Next, the serious part begins. A very demanding 4m section can prove to be an insurmountable obstacle for beginners, but once it is overcome, it is amazing. One even regrets that the ferrata finishes so quickly, as it is so enjoyable.

Camping in Champéry, in the area called the Grand Paradis.