It's more like a climbing route or a hike secured with a lifeline than a via ferrata in the classic sense according to French standards. The via is integrated with a hike that leads to the Mont Charvin summit. The sections of cable are sometimes fairly long: 10 m.

The two via ferratas are not connected to each other: The Pas de l'Ours Via Ferrata and the Golet de la Trouye Via Ferrata

It is imperative that you have a helmet, good hiking shoes and a rope with you if your hiking colleagues are afraid of heights. It's an equipped hiking route, but not always. Sometimes its slippery and dangerous. 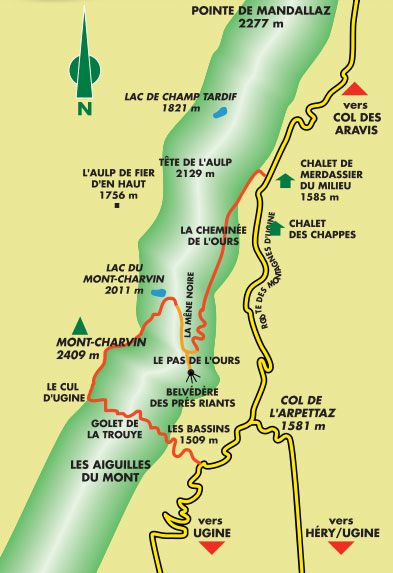 Ugine is found a stone's throw away from Albertville

From Ugine take the road that leads to the Arpettaz pass and then follow the paved road from the mountains of Ugine to the Merdassier du Milieu chalet at 1585m.

From the Merdassier de Mileu chalet you can reach the start via a trail that follows along the ridge which connects the Tête de l'Aulp to the Mont-Charvin in about 1h30.

A natural passage, the Mène Noire is a narrow ledge between a strip of schist and limestone. Follow it for 250m thanks to a route secured with cables that leads to the Mont-Charvin ridge. From here the view opens out onto the Alps and overlooks the Manigod valley and the Charvin lake nearby.

By climbing the fairly vertiginous ridge you get to the 2409m summit which is lined on the South with rocky cliffs. From the summit you can revel in the magnificent panorama of the entirety of the Northern Alps along with the Mont-Blanc and Beaufortain massifs.

Check with the Tourism Office. There is a camping nearby.

We have 544 guests and no members online