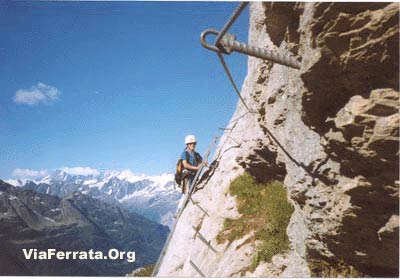 Takes two days, the approach is a bit long, but of mid-range difficulty. The via has several vertiginous sections.

Take the map of the area and all the gear you need to spend two long days in the mountains.

Only go if the weather is good and stable because there are no way outs. At the beginning of the summer snowfields remain at the start, on the ledges at higher altitudes and on the return path of the north face (equip yourself with crampons and an ice-axe if needed- but you must know how to use them).

Reserve a place at the hut before leaving.

Lyon-Geneva, A 40; Geneva-Lausanne N1, in Vevey go towards Bern, Basel/Bâle N12;
->In Bern, take N6 towards Interlaken,
-> in Interlaken go towards Méringen-Furen.

By bus from Meiringen to Gadmen. Contact the SBB for schedules and fares.

From Furen (1149m) on the road from the bottom station of the Tälli lifts (1171 m) to the Tälli restaurant; there is no official bus stop.

On foot, briefly follow the trail to access the Birchlaui pasture (1,597m) by going up the sparsly forested slope to the Tälli restaurant (1,716m). Take the sidelong uphill by following the white and blue markings under the steep walls of the Tällistock until you reach the start of the Alpligerstock via (2,067m).

The ferrata starts with a very steep ladder that leads to a flat vertiginous ledge. Follow it towards the right until the security equipment indicates a new ascent.

The via ferrata gains more and more altitude with some steps in the rock, grassy overhangs, and narrow ledges; there is a welcoming bench one third of the way up the via ferrata.

Follow a fairly exposed traverse before taking the path that leads to a kind of terace ledge on the upper part of the rock wall. Three staggered vertical ladders allow you to easily climb an abrupt dihedral. Stay focused when you go from one ladder to the next...your heart will skip a beat!

Another metallic ladder leads sideways to an ascending grassy ledge. To finish, we climb the ridge via a landslide to the exit.

Sign the golden book that is found in the cave.

Follow the white and blue markings to a rocky cirque (snowfields often remain here at the beginning of summer).  Be careful as some of the steeper snowfields can be icy.

It will take a good hour, then, take a more or less flat path heading SW for another good hour, which includes the way back up towards the Satteli pass (2119m).
Lastly go back down towards the Tallihutte in about 45 min.

We have 432 guests and no members online