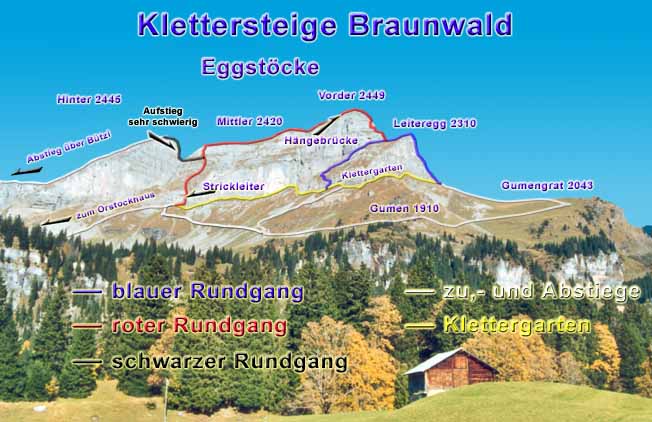 In 3 parts. Backdrop of pristine alpine scenery. A rather impressive section on a ridge.

Action-packed and includes a long footbridge. Lots of fun.

Only do it if the weather is stable. Do not go if thunderstorms are in the forecast!

The last part is really hard and includes a very strenuous overhanging section.

Check with the Tourism Office to see if the funicular is open.

June to October. Check with the Tourism Office for opening.

The city of Braunwald is a resort town without cars. You can get to it from Linthal.

To Braunwald. The automobile-free resort city of Braunwald is accessible with a funicular that leaves from Linthal (direct trains from Zurich)

Train and bus: schedule and price.

You get to Braunwald (1256m) from Linthal deep in the canton of Glaris- from Zurich via the Ziegelbrücke- with the funicular.

From the Gumen Berggasthaus (1901 m; information signpost) take the marked trail and cut across on the steep side to where the paragliders take off at the Gumengrat and then go to the left of the entrance fence, and then up some rocky steps (2120m).

You go past the stacked ledges of the Leiteregg and then the climb gets steeper and steeper until you reach the summit. You pass through a short chimney where there are stakes instead of steps.

You keep going to the left down a deep crevasse and then abruptly come to a set of rungs that go towards a dihedral under an overhang. You arrive at a platform and vertical wall.

Next a short downhill towards the Vorder Eggstock where you will come to a junction. On your way down, go under the rocks on the grassy slope to your left (be careful not to make any rocks fall as the climbing crag is right beneath you)

Two ladders get you to the base of the rock wall. To your left, the way back to the starting point.

Go diagonally to your right at the junction, the way up will get steeper and steeper until you reach a rocky shoulder. Keep going until you reach an almost vertical ladder, its help will grant you access to a horizontal ledge.

From here, go up a steep and tiring chimney to your left (metal pitons) in order to get to the easier terrain. A last push gets you to the summit of the Vorder Eckstock (2449m).

On the other side of the north face of the ridge you go down towards the "Charlotte Bridge", a 16 meter footbridge, spectacular but presenting no challenges, that crosses over a gap. Next you keep going via the rocks on the south side, then as you near the summit cables secure you all the way to the all-lawn summit of the Mittler Eggstock (2420 m).

A brief descent to the next junction (go right towards the Hinter Eggstock), then (careful: don't make any rocks slip!) to finish, we attack a very steep downhill with the help of a slightly shaky (but sturdy) rope ladder that goes down over an overhang.

By way of the scree go back to the hiking trail that leads from Gumen to Bützi and on the left to the lifts.

From the junction, go down slightly into the gap (2358m) under the Mittler Eggstock before the Hinter Eggstock, then go left on the rock face and it will climb more and more steeply.

The strategic point is slightly overhanging and very demanding. Finally, you'll have no problem reaching the end of the route atop the Hinter Eggstock (2445 m).

Follow the white-blue-white markings through the flowered meadows of the Ober Boden, you'll go down tranquilly to Bützi where you will find yourself on a hiking trail.

Go left on this trail and go down by way of a terrace. Get back to the resort with the Gumen lifts.

Check with the Tourism Office.