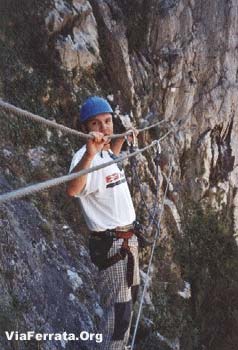 A stone's throw away from the city center.

In two parts. The second part is reserved for well trained via ferrata-ists. Oh boy! It's tough...

With 1 rope bridge and 1 footbridge

For additional information contact the Bureau Information Montagne (Mountain Information Desk) located on the 1st floor of the Grenoble Tourism Office, they can also give you information for other mountain activities: hiking, MTB, climbing, white-water, mountaineering.

When arriving in Grenoble from highway A48 take the "Bastille" exit which is located at the "Porte de France" and the Esplanade parking lot will be on your left.

Leave your car in the Esplanade parking lot which is located at the entrance to Grenoble. Lock your doors and don't leave anything on the seats.

By Train or Bus

For once you don't have an excuse to not take the train: Stop: Grenoble Train Station. Check with the SNCF: schedules and fares.

From the Train Station

Directly across from the station exit go towards the Casimir Périer street and keep going to the Place Hubert Dubedout. From here, cross the Isère river on the Pont de la Porte de France and you will arrive at the Porte de France (a kind of mini Arc de Triomphe).

The starting point is at number 22 Route de Lyon, 100m from the Porte de France behind the Esplanade parking lot. In front of you you will be able to admire the old Vicat quarry. The gate is open from 9 a.m. to 8 p.m., the latest recommended start time is 4 p.m.

The Prise de la Bastille via ferrata is made up of two parts.

The first part,
With a grade rating of difficult - you start off by climbing up a pillar and then traversing the entire Vicat Cirque,  which includes a rope bridge and two footbridges. A beautiful view on the city of Grenoble.

Part 2
To get to the second part take a trail through the Guy Pape Park which will lead you to the foot of the second section in 15 minutes (there are signs along the trail).

The second part is essentially an ascending traverse of an overhang, it's really strenuous and there is no where to rest. Two escape routes were put in place to allow those who are worn out to still make it to the summit. It's tough stuff, and it is for you, friend with experience and strength.

Once the second part is finished you go over another small projection which is followed by 150m of steps that lead you to the ancient fortifications of the Bastille.

Here, take a picture and post it on social media for all your friends to see, and don't forget to add: "I did it!"!

To go back down there are two options: Either go up 15 minutes to the top of the Bastille Fort and then use the lifts to get back to the city center, or take the Jardins des Dauphins path which will lead you to Porte de France in 20 minutes.

It's a big city, you'll be able to find something nice.